Tadashi Ban and Kazuyuki Matsui are Japanese high-school physics teachers with a passion for mirages. They have compiled superb websites, replete with photographs of these phenomena, mostly photographed at Lake Biwa, the largest lake in Japan. Furthermore, both of these gentlemen managed to photograph mirages of the same object (the Lake Biwa bridge) on the same day (May 13, 2001), but from opposite directions. So their images give nearly simultaneous information about the conditions on the northern and southern portions of the lake during a strong mirage episode.

But before you send your browser to Tadashi Ban's home page at www.biwa.ne.jp/~t-ban/, or Kazuyuki Matsui's mirage pages at https://biwakodas.sakura.ne.jp/shinkirou/shinkirou.htm, you should be aware that nearly everything there is in Japanese.

In principle, it should be possible to copy their URLs into https://translate.google.com/ and get a translation. Unfortunately, what passes for a “machine translation” of Japanese is often gibberish. Sometimes the machine translation says “lower mirage” instead of inferior mirage. Furthermore, most of the pictures are 2 or 3 levels down in Mr. Ban's website, so without some guidance it is difficult to find what you want. So I have prepared a short guide to these Web pages, including the actual links, in case you want to feed them to the Google Translate server.

Before we get started, please bear in mind that Mr. Ban and Mr. Matsui own the copyright to their pictures. Mr. Ban's site also contains copyrighted photographs made by other people. Don't copy or re-publish those pictures without the permission of the copyright owner.

How the mirage photographs are arranged

The first link on each of those pages contains the English word MENU and is a link to the other page. The remaining links are to pages that display mirage photographs, usually arranged in chronological order, with the most recent pictures at the top of the list of links.

Mr. Matsui's pictures also deal with the inferior mirage, and he has a spectacular superior-mirage set. He has arranged his pictures in groups of panoramic strips that often show the time- or height-dependence of these phenomena.

Here, I'll intermix pictures from the two websites, so as to group similar phenomena together, regardless of who did the photography. But, as they often are looking in opposite directions, it can be confusing if you forget whose pictures you are seeing.

Before looking at the pictures, it's useful to get some idea of what you are looking at. Lake Biwa is the largest lake in Japan, some 64 km (about 40 miles) long. It is divided into two unequal parts by a narrow neck, spanned by a magnificent bridge 1.35 km (nearly a mile) long. The long axis of the lake runs approximately NNE – SSW. The southern portion of the lake is much narrower (only a few km) than the morthern part, which is about 20 km wide.

Mr. Matsui has prepared a map from a satellite image of the lake. His map shows the lines of sight from his usual observation point on the western shore to the places he has seen miraged, with distances drawn in. By a remarkable coincidence, both observers are about equally far from the bridge, and almost exactly in opposite directions from it.

Because of the clean, simple lines of the bridge, it makes an ideal target for illustrating the effects of mirages, and allows even minor refraction effects to be detected that would go unnoticed in observations or ordinary scenery. So we will be seeing a lot of this bridge.

Mr. Ban's inferior mirages begin at http://www.biwa.ne.jp/~t-ban/lensnohashi.htm with views of the bridge that lies across the neck of Lake Biwa. Mr. Ban likens the image of the arch of the bridge and its reflected image to the cross-section of a biconvex lens. The pictures were taken from the south end of the lake, so these views are looking north, with east on the right and west on the left.

The second link shows some buildings in the lakeshore city of Moriyama, first without a mirage, then miraged.

The third link shows some very striking images of the inferior mirage at night. If you are accustomed to thinking of inferior mirages as just the hot-road mirage that is so commonly seen on sunny days, you may be surprised to see these nocturnal versions — though I have occasionally seen inferior mirages on asphalt roads after sunset.

The miraged objects here are the lights on the bridge, and the Ferris wheel (of 106 m diameter) to its left. The last picture on this page is particularly remarkable, as it shows both the inferior mirage of the wheel (the small, sharp image just below it, indicated by the blue bracket) and the reflection of the wheel on the lake surface (the “glitter path” — here smoothed out by the time exposure, so that you do not see the individual glints on wave facets, indicated by the green bracket). Mr. Ban has granted me permission to reproduce his photograph here:

Compare what you see here with the following passage (translated) from Johann Georg Büsch (1800):

I noticed this phenomenon already in my youth, on crossings [of the Elbe River] from Hamburg to Harburg, lying about a [German] mile away, where my grandfather lived. If the wind moved the waves about the ship fairly strongly in the middle of the stream, the water at the shore seemed to be completely still, like a flat reflecting plane. The shore-dwellers told me this came from the shallows at the beach; only, if we climbed to a height and looked down from there toward the opposite shore, the water there was also full of waves.

The inferior mirage at sea has often been mistaken for a reflection on still water. But no substantial body of water is ever at rest; and Mr. Ban's photograph clearly shows the difference between the perfect reflection of the mirage image, and the drawn-out trail produced by reflection from the moving water surface.

Mr. Matsui sees the bridge from the north side; so his pictures of it have east on the left and west on the right, as he is looking southward. Remember, his pictures are taken from the other side of the bridge from Mr. Ban's. A complete panorama of his view of the lake is shown (in sections) at https://biwakodas.sakura.ne.jp/shinkirou/020404r1200.jpg.

At the Komatsu beach from which Mr. Matsui can observe mirages almost every day, there are stone steps leading down into the lake. By standing on different steps, he can photograph the inferior mirage from different heights above the water. A nice example is at https://biwakodas.sakura.ne.jp/shinkirou/021029LBB_km.jpg, which shows several effects very nicely: 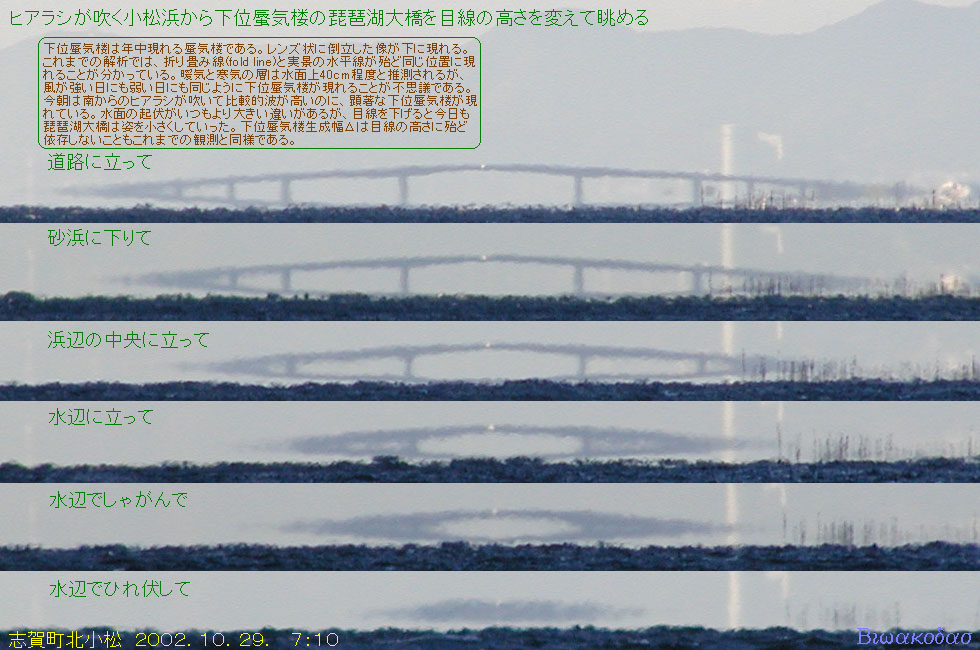 Mr. Ban's superior mirage page at www.biwa.ne.jp/~t-ban/jyouisineizou.htm is much more extensive, as these phenomena are much more varied. The pictures include both simple 2-image superior mirages, 3-image mirages, and a few examples of higher multiplicity, as well as other refraction phenomena like towering and stooping.

Let's begin with the beautiful and striking 3-image mirages of the Lake Biwa bridge (Biwako Ohashi). Here's its normal appearance, as seen from the south:

Notice that the main span is high enough (26 m) to let ships pass under it. It is approached from the east (right) by a low causeway.

Now here it is with a well-developed 3-image mirage:

Clearly, there are places on both sides of the highest part of the bridge that are triply imaged, forming a “Z” shape. Here's a closeup of the “Z” on the right side, taken a minute earlier:

If you look closely, you will see that the most distorted parts of the bridge are in a slightly brownish layer of air. The thermal inversion that produces the mirage also traps urban smog.

Here's a link to another page:

Where the pictures were taken


Back to the ...
main mirage page GF home page